A book that contains the world

DOWN WITH ! → BACK TO THE FUNDAMENTALS OF THE NOVEL

I tell stories and I paint ideas

I am five years old and I have a toothache.

My mother doesn’t slap me but tries to explain that I shouldn’t “say things like that”. Education against instinct.
→ humanisation… It is also called: becoming civilised! Only to brainwash you and make you get into line! Your whole adult life training… So that you wouldn’t say anymore: a fat lady with a big pimple on her nose. But: a lady with a nose. The problem is that by dint of saying it we end up thinking it. And by dint of thinking it we are prevented from…

When I became a writer, all of that went down the drain. I recovered my entire brain at once. And the fat lady from the Rue du Château-­‐des-­‐Rentiers. Maybe that’s why one becomes a writer… To be able to say: “The fat goodwife with a big pimple on her nose. Wow!”

You are going to live an unforgettable experience: that little child with a toothache… 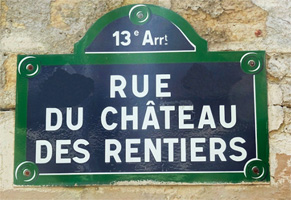 Humanisation (in that Big Bazaar that is the World)

Down with! Freedom – that could have been also called How to busy yourself (intelligently!) while waiting for the death to come reconciles two antinomic forms: the novel and the essay.

Summary: a writer who doesn’t know what to write… (and engages in that activity only to stop his brain spin its wheels) undertakes to discharge “everything a human being’s memory can contain”: his own memory, that is! Oi mi ricordo… I remember. As a result, the undertaking is successful because it has failed ® instead of recollecting he has made up lots of stories: 303!, to be precise. When one wants to find some nobility in something that is in fact an expression of mental illness, one calls it pompously: creativity.

All memory work is an act of creation and literature is its ultimate pose.

You are entering a universe: by relating the lives of residents of an apartment block on the Rue du Commandant Mouchotte in Paris (Mouchottians), the novel examines society and human condition at their most crucial moment since the time when humans settled down at the beginning of the Neolithic period and when the first cities were created. That is, when male of the species became dominant and had to find – appropriate! –solutions to a whole lot of new everyday life problems (such as sharing out women, children… and property, both real estate and movable assets). And to do they invented® “the couple” and private property.

Well, not really… by the time the narrative ends, the society model has changed. And so has the scale: the world has become “smaller”. It can be photographed from the space. It has become a tourist site: everything is only a few flight hours away, within reach on a weekend… Virtual: at light speed. At the pace of the Net and the computers. Feelings have shrunk, too: sex has become automatic and miserable. It has become a farce we could soon do without (thanks to the progress of the Science).

Love is no more an ideal or an absolute value. Couple and private property (as well as their derivatives: allegiance to the dominant male / accumulation of wealth / etc.) have become obsolete. Or, at the very least, they don’t make anyone dream anymore. 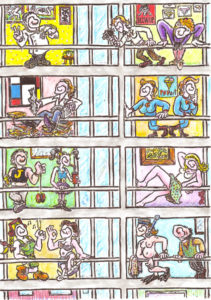 Down with! Freedom is a sort of photograph (in the shape of a literary investigation in real time) of this slip:

Fig. A: Change of era…
perhaps of civilisation

Born from zapping and a flavourless existence made of little bits lacking consistency that he can’t put together anymore.

As we progress in the novel… trapped in the notion of free will (in a society without landmarks), the Mouchottians have more and more trouble taking responsibility for themselves. Alienation doesn’t come anymore from an oppressive Surveillance State that (like in the tyrannies of the past), but from individuals seeking to alienate themselves voluntarily for reasons of safety and comfort.

Internet and algorithms are a perfect base for creating this voluntary servitude.

How did this happen?

1970s: at the beginning of the narrative the Mouchottians live in a society that offers maximum freedom and abundance.

A hedonist society seeking immediate gratification and repetitive sorts of entertainment that humanity has certainly never experienced before. But a different reality shows through the burlesque adventures of the Mouchottians. After a short period of mindless fun and games… the deep nature is resurfacing. 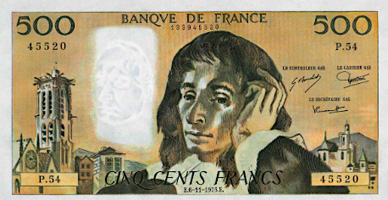 If man is a thinking reed (according to the lenient definition of Blaise Pascal whose aspirin-white face adorned the old 500 Francs bills) et seeks to transform his environment like the termites or to understand in what kind of world did he find himself… it isn’t because he’s on a sacred mission! – but to keep his mind busy. Or, if you prefer (a paradox) – to avoid thinking too much!

Animals think but don’t ask themselves all kinds of stupid questions! Eros and Thanatos = to be born / to die / to breed in the meantime… seems to be an unthinkable horizon for them. And this must be the case with most forms of “intelligence” in the observable Universe. There is still hope! ® hard to admit that a flaw could be a sine qua non condition for a superior level of evolution.

The perfect happiness, said Sophocles, would be not to think…

A remedy against this painless disease seems to be the case for the residents of the native village of the main character, who, unlike the Mouchotteans, live in harmony with their environment. How do they manage? ® they avoid asking too many questions!

This is the case of the priest Merdougue (a holy man and the conscience of his community) who spends his time fishing roach, while Bertou prefers fishing gudgeon! No, it’s the opposite: Merdougue = gudgeon / Bertou = roach.

Do you know of a bigger misfortune for an animal than to be a Man? 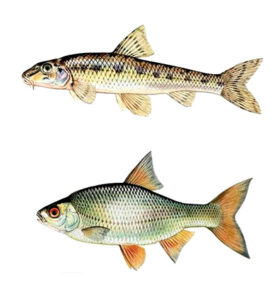 When the novel nears its end… the main protagonist in constant distress stubbornly tries to escape the feel-good society of compassionate in-a-loop news that have penetrated all the gaps in his private life (sexuality / beliefs / civility / summoning to think positive / etc.). A philosophy rather well summarised by a “reception hostess” robot. That intersperses its sentences:

When he realises that there is not a square metre left on Earth that hadn’t been explored, not the tiniest nook on the Internet where to hide from algorithms!, chased by a pizza delivery man, he has no escape other than to jump into the Garonne River. That’s one way to stop the incessant flow of thoughts that is torturing him since birth.

Jump into the Garonne or have a pizza? That is the question.

If this novel was like today’s novels (to which we could add a good number of the novels written in the second half of the XX century) that are disguised dystopian novels and fits of hysterics in the open air!, we could stop here. But it would be without taking into account Non-­‐Augustine de Cadaujac (143 years old -­‐ resident of the Posts and Telecommunications Nursing Home of the Gironde Region) and the inopportune throwing of a shoe from the high-speed train Paris-Irun at 320 km/h at 7.28am.

In the universe of the Novel, there is always a crucial moment: to avoid suffering… the last of the Mouchottians realises (after having read it in a newspaper!) that he has “a civilisation to save and an ideal to defend”… Translation: To survive, Man has to harbour illusions.

Freedom… the root of all the problems of the world! 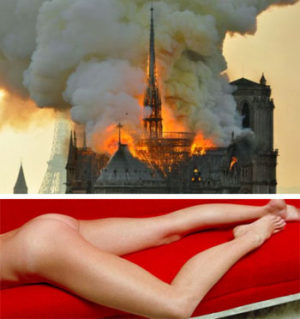 Contemporary of Internet surfing. Where the reader goes without any transition from the fire of the Notre-Dame de Paris to the bottom of Brigitte Bardon in a film by Jean-­‐Luc Godard.

Not unlike Boccaccio’s Decameron, this novel is composed of 303 chapters (101 in Boccaccio’s) that are hilarious short stories (in fact, it is life itself that is hilarious!). At the end, it is one and the same.

And when the narrative ends… the post-scriptum reminds that all of that happens “in the land of words” and in the head of the narrator (which is also true for the reader!), as it was announced in the prologue:

Nothing in this world exists that wasn’t born in a brain.

→ A book out of the ordinary

To read and reread backwards and forwards. In small portions (in the public transport / while commuting / in bed, etc.) or in one sitting… Available as an e-book or a print edition.

Summary of the book → I would like to tell more but I don’t want to spoil it!

In fact, no. I might as well tell the truth: to summarise 303 stories that form a whole… would be (almost) as long and to tell every one of them. You might as well read the book. Frustrated?

Mystery without obsessive curiosity? → a proof that you are alive / not yet swamped in those little deaths called habits.

You want to escape. To clean up your brains. To feel free… I can feel it.

In your opinion, what drives the world?

You need this book like a breath of air.

The last inventory before the loss of humanity – 2020 / first delivery